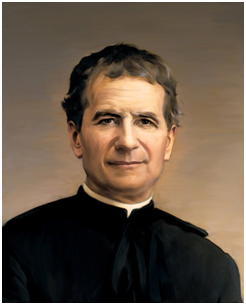 Saint John Bosco, the founder of the Salesians was born in Turin, Italy in 1815. His father died when he was two years old. He was raised in a Roman Catholic Christian family. and was taught the importance of faith in God. He experienced the pains of poverty at a very tender age. John’s future work was inspired by a dream he had at the age of nine. He wanted to become a priest, especially to assist the youth. In order to pursue his dream John had to leave home at a young age to join the city school. Being bigger than his classmates, he was often the object of much ridicule. Little did they know at what cost John finished his schooling. After school he worked as a tailor, a cobbler or a waiter, often studying by candle light late into the night. On completing his education he began his studies to be a priest.

John Bosco was ordained a priest at the age of twenty-six. He was now called Don (Father) Bosco. He immediately began his work with orphans. He opened a hospice for boys where his mother served as the housekeeper. He not only fed the homeless boys whom he took in but also provided them with opportunities for livelihood skills. He spent long hours teaching them to read and write; he also taught them tailoring and shoe making and quickly set up a printing press. Above all, he created a family atmosphere of trust and caring. Those who helped him were amazed at the transformation in several youngsters.

Soon those associated with Don Bosco and his work began to accept him as their father and guide. Some expressed their desire to become like him. And so, the Salesian Society consisting of priests and lay brothers was born. The greatest gift that Don Bosco has left posterity is his unique way of educating, a method that was inspired by his one magnificent obsession: “It is enough to know that you are young and abandoned for me to love you very much.”

The “Salesians of Don Bosco” is an international society founded by Don Bosco. Catholic Priests and Brothers who are members of the Society work for the development and education of the young especially those most at risk. Through its 3000 Schools, Colleges, Technical Schools and youth centers in 132 countries, the Salesians of Don Bosco serve all young people irrespective of religious differences or social inequalities. The word ‘Salesians’ is from the name of the Patron, St. Francis de Sales, a saint much admired by Don Bosco.

In India, Don Bosco Educational institutions are spread all over the country and are in great demand. The style of education consists in involving young people, their parents or guardians and the educators in a family atmosphere. The method of education, “The Preventive System” based on Reason, Faith in God and Loving Kindness, was lived and handed down by Don Bosco himself. He insisted on integral education. This embraces developing physical and aesthetic talents, training in occupational skills, fostering intellectual skills and competence, furthering cultural development and integration with others, including moral uprightness.